You are here: Home Activity & Moods Does Smoking Weed Make You More or Less Depressed?

Can smoking weed make you depressed?

The Link Between Marijuana and Depression

For lovers of cannabis, depression can be a lingering feeling they have to grapple with. Many people diagnosed with clinical depression use marijuana as an alternative medical treatment. Others may suspect that the use of marijuana and depression are intertwined, since smoking can sometimes make them feel “down” or worsen negative feelings.

The truth is that both parties may be right. Cannabis use and depression seem to be linked together in ways researchers don’t quite fully understand. Some research shows that cannabis use can be a great way to treat depression, while other studies suggest that people who smoke regularly may encounter deeper issues with depression.

One area of promise can be found within the plants themselves. There appears to be some marijuana strains that treat depression while others seem to make it worse. The chemical differences between certain strains could be the key for how cannabis may help or hurt someone dealing with depression.

So can smoking weed make you depressed? We’ll explore the link between cannabis use and depression to see what factors may be at fault and why some marijuana strains seem highly promising for treating chronic depression symptoms.

Can Smoking Weed Make You Depressed?

After using cannabis, depression is far from inevitable. That’s because marijuana is not strictly classified as a “depressant” drug.

Other studies have found that marijuana may help regulate GABA receptors, similar to a large group of antidepressant drugs.

Yet, even though marijuana seems like chemically it would do the opposite of make you depressed, cannabis depression has been an observed effect in several studies. One study found that people who used marijuana had a worse recovery period for their depression symptoms.

Another study found that the dopamine released while consuming marijuana could dull its pleasure-inducing effects on the brain. People who smoke pot get used to the feeling of being rewarded chemically, so things that should give them a “natural high” like accomplishing something seem less effective at raising their spirits.

With all that said, many studies fail to establish a firm cause-and-effect link between cannabis use and depression. It could just be that people who are depressed are more likely to smoke marijuana, which distorts the results and can spur misleading findings. 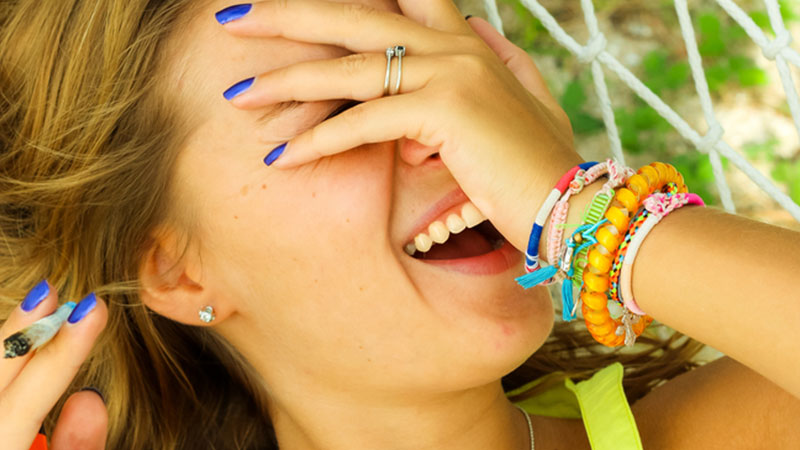 The most remarkable — and confusing — thing about cannabis depression is that many studies find that smoking weed can make you less depressed. A study in rats found that chronic stress can reduce our body’s abilities to make its own natural endocannabinoids.

So why do these cannabis depression studies yield such different results? There could be a couple of different things at play.

THC is a stimulant, which means that some strains of marijuana help with fatigue. After using marijuana with a high concentration of THC, someone may feel energized, creative, and uplifted.

However, they may also feel paranoid and anxious. That’s because THC acts on nerve receptors in our body that can trigger a “fight or flight” response.

Dosage seems to be another key for marijuana and depression. Small doses of a synthetic THC compound seemed to help depression in mice, while higher doses worsened symptoms. Working with your doctor and experimenting with differing doses of marijuana and CBD could therefore be the key to regulating mood.

Another reason that the answer to the question “can smoking weed make you depressed?” is a “maybe” could be internal genetics. Some people are genetically more likely to get depression.

Similarly, some people seem to react to cannabis use and depression differently, and genetics could be the link. One study found that the presence of certain genes within DNA could be an accurate predictor for whether marijuana made depression better or worse.

The study looked at siblings with identical genetic traits and found similar results between sibling pairs. In other words: if someone used cannabis and felt more depressed, their brother or sister who had the same gene was likely to have a similar reaction.

Therefore, the reason that some people have trouble treating depression with marijuana could be genetic.

While there are many thousands of successful individuals who use marijuana, the stereotype of the unmotivated stoner persists.

That could be because, for some people, smoking marijuana can lead to repetitive habits and a lack of productivity. For example, someone could intend to study or research job opportunities but end up smoking weed and playing video games instead.

The feeling that someone cannot control their environment or their life conditions can worsen depression. If someone is not able to feel like they are accomplishing things or that their responsibilities keep getting ignored, they can fall in a vicious cycle of depressive symptoms.

For people who feel like marijuana makes it hard for them to feel motivated, marijuana could seem like the culprit for their depression. However, they can potentially alter their habits or find marijuana strains that improve energy to avoid falling in the trap of smoking and then feeling unhappy.

Often, making a few improvements, setting goals, and achieving a few accomplishments is enough to break the connection between cannabis use and depression.

So, Can Smoking Weed Make You Depressed? Possibly, But the Connection Is Not Proven

On the whole, researchers have not yet established a firm connection between marijuana use and depression.

Individuals who feel like marijuana is worsening their conditions may want to experiment with new habits, new strains, or new dosages to improve their sense of well-being. They should also recognize they could have a genetic predisposition towards both depression and feeling more depressed after smoking.

On the other hand, some people who have not yet tried cannabis may find that marijuana helps alleviate their depression and improve their outlook.

If you are unsure of which marijuana strain is right for you, check out the list of symptoms to determine which strain is best suited for your medical needs.