You are here: Home Activity & Moods Yoga and Marijuana Are Better Together, Go Back Thousands of Years

Go Back Thousands of Years

Is it good to do Yoga after using cannabis

How Weed and Yoga Got Their Start Together

With “Ganja Yoga” classes popping up all over California, many news outlets are covering the new rise of yoga and marijuana as some sort of new phenomenon. But, in fact, weed and yoga have a history together stretching back millennia. Because marijuana was first cultivated by yogis in India, one may not even have existed without the other.

On top of this fascinating history, there’s the added benefits that cannabis and exercise can bring each other. As we covered in a recent post, using a small amount of marijuana before being physically active can bring a host of advantages. It works particularly well for a relatively light and mindful workout like yoga offers.

This should come as no surprise considering that cannabis and yoga emerged at about the same point in history. Learn more about the history of how they came about together and some of the benefits marijuana yoga can offer by reading more below.

How Weed and Yoga Got Their Start Together 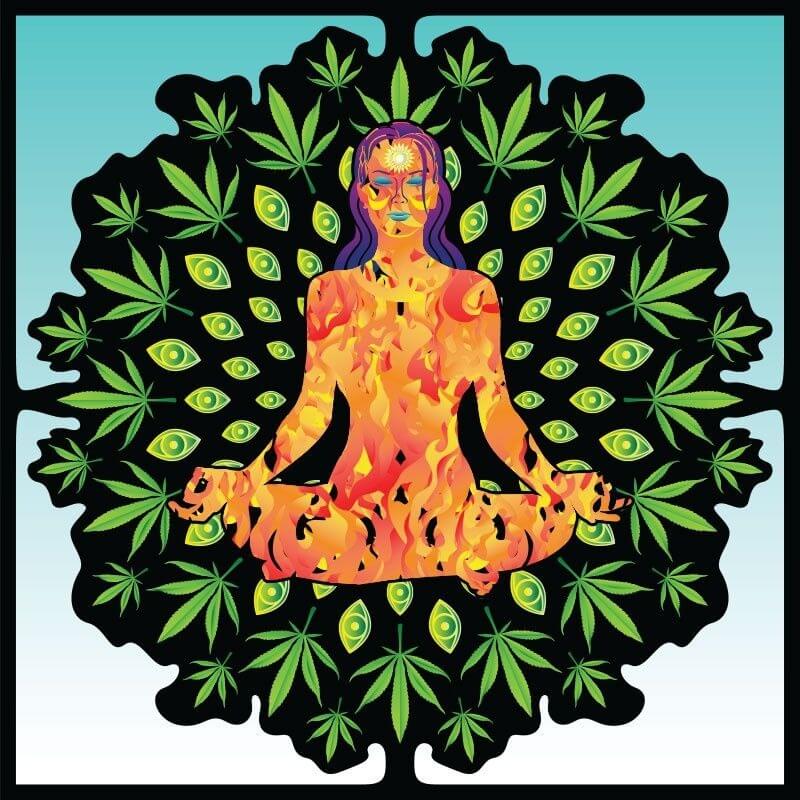 Yoga didn’t get its start as the sequence of poses we know today. Instead, it was more of a system of religious laws, beliefs, and practices. You can think of it as similar to the teachings of Leviticus in the old testament, which laid out the rules on the kosher diet, being charitable, and conducting yourself in a religious fashion.

The original, classical form of yoga was called “Raja Yoga.” It was organized by a man called Patanjali, who described an “eight-limbed path containing the steps and stages towards obtaining Samadhi or enlightenment.”

Centuries later, the spiritual practices inspired certain yogis to explore the connection between our spirit and our physical bodies. This new school of yoga was called “Hatha Yoga,” and it gave rise to many of the yoga poses and practices we use today.

During this time, many cultures in the Indian subcontinent had begun to cultivate cannabis. Religious and spiritual leaders quickly noticed the potential for cannabis to alter their mental state. They associated this new frame of mind with a deeper form of spiritual enlightenment. To smoke marijuana or consume bhang was to explore the connection between our bodies and the spiritual plane.

“In particular, the sadhus, Hindu holy men and mystic yogis, are known for their use of the cannabis plant for spiritual purposes, especially on holidays,” writes Alternet’s April M. Short. “To these yogis, cannabis is a tool to aid in reaching nirvana, or liberation from the perceived existential limits.”

It wasn’t until the 1960s when the U.S. pressured India to make cannabis illegal that the connection between cannabis and spirituality was broken. While many yogis openly flouted the law to follow their traditions, some religious and spiritual schools began to treat cannabis on the same level as intoxicants like alcohol or opium.

“There came this anti-drug aspect to Buddhism and meditation,” recounts founder of the Multidisciplinary Association for Psychedelic Studies (MAPS), Rick Doblin. “And now, what we see is this coming together again of Buddhism, meditation, and psychedelics [and cannabis] in kind of a parallel process.”

How Yoga and Marijuana Can Benefit One Another 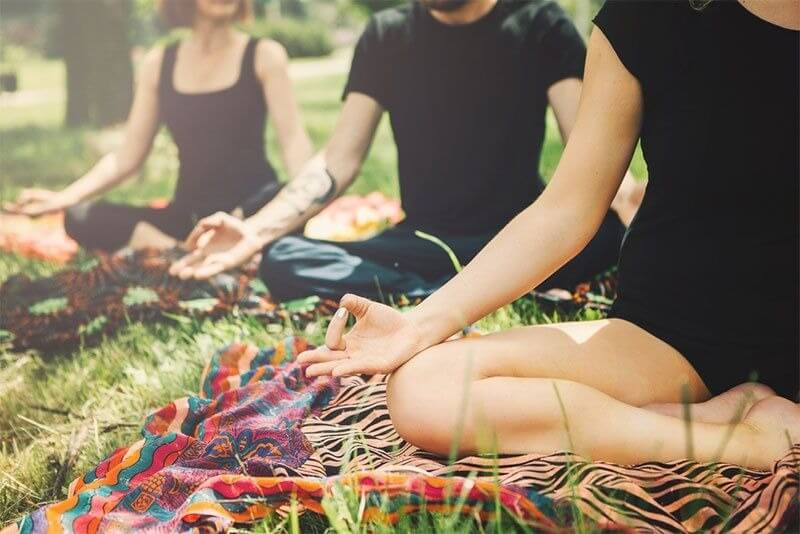 In the west, the practice of yoga is thought of as a way to “check in with our bodies.” We may be taking shallow breaths or holding tension in our bodies in the form of bad posture. By focusing on our breathing and invigorating our bodies through selective postures, we can be mindful of the ways we limit ourselves physically.

Getting a decent workout and stretching overworked muscles never hurts, either!

Combining the stimulation yoga provides with cannabis unveils some pretty potent benefits. “It is exciting and exhilarating to develop and explore yoga as a practice,” writes Leafly’s Naomi Fowler, “and I’ve been happily surprised to discover that cannabis can enhance this exploration.”

When two writers from Buzzfeed decided to try the “ganja yoga” craze for themselves, they found similar benefits. Jess Misener reports that being high during yoga helped her focus on her breathing. “I’m not super great at keeping my focus on ujjayi, but I found that during this class, it was much easier to remain grounded and keep my mind on my inhale and exhale.”

She also found that it made her more aware of the spiritual connections yoga is supposed to awaken. “At one distinct moment during child’s pose, I remember thinking, ‘I AM ONE WITH THE MAT. I AM ONE WITH THE GROUND. THE GROUND IS ME.’ That is when I decided to stop hitting the vape.”

Finally, the extra stimulation from combining cannabis and exercise made the class much more enjoyable to her. “Class went by in a SNAP,” she writes. “I tend to get bored during yoga classes that are longer than an hour, but the second half of this one felt like it was only five minutes long. Thanks, cannabis!”

Finding a Marijuana Yoga Class Near You 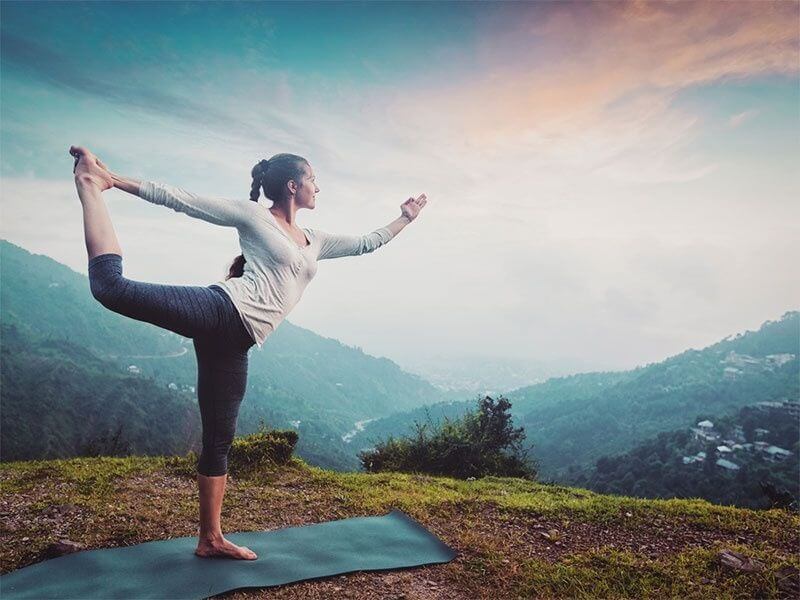 Despite their millenia-long relationship, the recent combination of hatha yoga classes and cannabis is relatively new. If you don’t live in certain cities— especially those along the western coast of North America— finding a class near you could be difficult.

But they do exist! Aura Cannabis in Vancouver, BC, for instance, holds occasional cannabis-focused yoga classes. There’s also an entire ganja yoga program at the House of Yoga in Toronto.

For those in Montreal and other major cities, classes may be more sporadic events. Keep an eye out in local groups or on event announcements for local studios to find a group class.

Then again, any floor can become a yoga studio when you add your own mat! Simply light up your favorite type of ganja, visit one of the many yoga instruction channels on Youtube, and start enjoying the synergy of cannabis and exercise together.

If you’re looking to try particular strains of cannabis for yoga, look for weed strains that relieve stress or ones that give you energy. Leafly recommends finding strains with a higher CBD content since that can prevent anxiety and help soothe your body, such as Harlequin or AC/DC. You can also try vaping or eating edibles instead of smoking to prevent being short of breath during your session.

Other than that, be sure to drink plenty of water and listen to your body as you move through the poses. With the help of marijuana, yoga could be better and more enjoyable than ever.