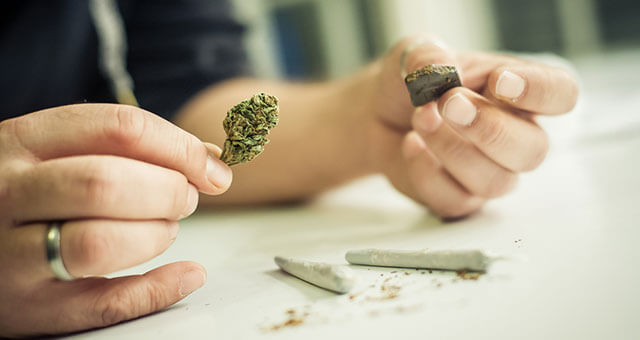 The cannabis plant has never really deserved the bad reputation it’s had over the years up until recently. Now that it’s legal in Canada, there’s much more of the truth to be had. Not only is there so much therapeutic potential with medical marijuana, but its now acceptable to enjoy recreational cannabis in Canada. As is the case with nearly anything, however, moderation is the key. There’s a lot of people who aren’t quite yet experienced with cannabis who will want to know what’s the difference between bubble hash and marijuana, and what exactly is bubble hash?

Obviously we’re plenty knowledgeable on this subject, and we’re happy to share what we know. And if hashish is likely to be more your thing, we can also give you some tips on how to smoke hash. The different texture of the putty-like hashish is very different from the dried leaves of the cannabis bud. It’s not possible to roll it up in a paper and smoke it in a joint like you can with marijuana (although you can smoke both together in what’s called a spliff – more on that to come).

What’s also interesting is that while good marijuana is grown all over the world, the best quality hashish nearly always comes from the Middle East. In fact, Lebanese hash is generally regarded as the best hashish you’ll every try, with a nice mix of potency, aromatics, and flavor. Making hashish is a bit of a laborious process, but it can be done.

The most primary difference between weed and hash is in the physical form of each cannabis product. We alluded to that above, but weed (marijuana) is the dried flower of the cannabis plant and users break up the dense buds of this flower in order to smoke it, vape it, or ingest it by other means. When it’s broken up like this it looks the same as any other dried ‘herb’, like oregano or thyme for example.

Hashish is very different, and bubble hash included. Putty hash (with gold seal hash being the best of this type) is a dark brown solid material that is made from the resin of the marijuana. Users will break away some of the putty from the mass of it in order to smoke it or vape it. Rock hash is different from putty hash or bubble hash. It is drier and crumblier, and is usually more of a golden brown color.

Bubble hash is something entirely different altogether. It’s a cannabis concentrate like other types of hash, but what makes bubble hash different is that unlike regular hashish it’s not made from resin extracted from the cannabis buds. Instead, bubble hash comes from extracting the trichomes from the buds and then packing them together to create the final smokable or vape-ready form.

Perfectly understandable if you’re not familiar with that term. Trichomes are the small whitish or translucent ‘hairs’ on the cannabis buds, and when it comes to maximum THC and potency they are definitely where it’s at. When these hairs are collected and packed together you the fine, light golden brown crumble that is bubble hash.

Another primary consideration with the difference between weed and hash is the different potency (see THC content) they have. THC is the psychoactive ingredient in cannabis that provides the ‘high’ users are after. Most weed is anywhere between 10 to 20% THC content. Keep in mind here now that all types of hashish are concentrates, and with that concentration comes potency.

Even traditional (putty or rock) hash is usually around 50% THC content. Bubble hash nearly always exceeds that, coming in around 10 percent stronger most of the time. 60% THC content bubble hash is pretty common, and as you’d imagine it’s a hit with people who really like their smoke to pack a punch.

We’ll get to how to smoke hash next, but first let’s look at hash vs weed from the perspective of the differences between the psychoactive effects of each. Don’t think that bubble hash is the most potent though, as shatter or wax are cannabis concentrates that can be up to 90% THC content. Needless to say, use with caution.

As for the different effects, hashish that is made from an Indica, Sativa, or Hybrid strain of marijuana is going to have the same characteristics. The same standard guidelines apply – sativa bud and a sativa hashish will have the same uplifting, brightening, stimulating and creativity-enhancing effects, but the added potency makes these effects that much more intense.

Same can be said of cannabis indica strains and an indica hash – you can expect the same mellowing, sedating, and relaxing effects that indica strains are known for. Many people agree that hybrid sativa / indica strains are the best, and if you agree then you’ll probably enjoy the effects of hashish that’s made from a hybrid cannabis strain.

How to Smoke Hash

You’ve definitely got choices when it comes to how to smoke hash. The simplest of them is to break off some of it and then pinch some ‘nerds’, as they’re called, before loading them into the bowl of a pipe. That’s the most common and easiest way to smoke hash. A bong is a water pipe, and smoking hash in a bong is an excellent way to enjoy it.

We mentioned spliffs earlier, and they really are the best of both worlds. This also one more way how to smoke hash, and this is how to roll a spliff. What you do is prepare to roll a joint with dried cannabis. Once the herb is spread out along the length of the paper you sprinkle some hash onto it from left to right before rolling it up. It’s that easy, and it’s really good. Bubble hash is great here.

Last but not least, vaping hash might be the best choice. You get optimized decarboxylation of the THC and it’s obviously a lot easier on your lungs.