You are here: Home General The Skinny on Current Legal Marijuana Prices in Canada 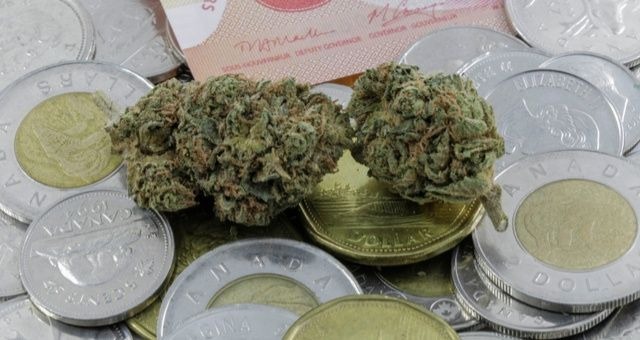 We’re now five months past the legalization of recreational cannabis in Canada. One of the more unavoidable realities since legalization is that legal marijuana prices are considerably higher than the average price people are paying for ‘black market’ marijuana. Further, when we look at medical vs recreational prices the trend is the same; medical marijuana tends to be more expensive than recreational marijuana, and particularly when that recreational weed is purchased privately.

The Federal Government stated that one of their primary objectives with legalization was to stamp out the black market for weed. However, these elevated weed prices seen at legally licensed pot shops and dispensaries across Canada are not going to be conducive to doing that. In fact, they may well have the opposite effect if average legal marijuana prices don’t come down.

So, what’s to be made of all this, and what will happen to marijuana prices now and in the future? This remains unknown, but there are some indicators we can use to make predictions.

The average price for a legal gram of recreational marijuana is hovering around $9.80, and this is in comparison to a gram of black-market marijuana being around $6.50. It is important to understand that these are average weed prices that take better quality and higher priced strains into account the same way it does lower quality and cheaper ones. All of this is reflected as expected in the fact that the average amount of non-medical cannabis purchased from illegal suppliers has been more than double the quantity bought legally from licensed providers in Canada.

If legal marijuana was sold with only the sales tax applied to it then it might be able to be closer to black-market price, but it has an excise tax added to it as well and this pushes the average legal marijuana price in Canada higher.

We’ll list out the prices for high-quality and average marijuana in each of the Provinces here, but we’ll start by saying that if you’re a cannabis aficionado you should be glad you don’t live in Nunavut. Marijuana is very expensive in the North of Canada, with some people paying as much as $6,8000 for an ounce of pot in this region.

That likely makes any of you buying legal marijuana anywhere else in Canada find prices in your neck of the woods to be more agreeable. Below is the cost of legal recreational weed in Canada, with a Province-by-Province comparison for weed of average quality: (source – www.priceofweed.com)

It’s interesting to note that New Brunswick has weed prices that rival BC, which is the Province that has always been at the forefront of cannabis use, advocacy, and where a good many of the largest and most reputable producers like Zenabis are based.

Medical vs Recreational Prices for Marijuana in Canada

Recreational weed prices in Canada have the highest degree of fluctuation between Provinces, and a greater degree of consumer dissatisfaction with product quality (even if that’s not relevant to pricing). Medical marijuana prices are more stable and industry experts believe they will continue to be. They also believe that medical marijuana users in Canada will not have to deal with inflated prices due to supply shortages the way recreational users will.

This is true despite new taxes on medicinal marijuana in Canada put in place to discourage recreational users from abusing the system. Another benefit for medicinal users is that they are better accommodated within the federal guidelines for purchasing product from out of their province. This is more difficult to do for recreational users.

Medicinal marijuana users who have their card have much less to be concerned about with continuing high prices for marijuana in Canada.

The Forecast for Legal Cannabis Prices in Canada

The long and short of all of this is that if the Government wishes to eliminate the black market for cannabis then they must find a way to bring their price per-gram at least reasonably close to that of the black market. As of now it’s not even reasonably close, and many industry experts say that it will likely take 2 to 3 years before the federal regulations and production capacities of a sufficient number of legal producers line up effectively enough to bring weed prices down.

It’s important to keep in mind that the Canadian Government is looking to make a tidy taxation profit on the sale of cannabis, especially considering the tax income windfalls seen in Colorado and Washington states in the USA following their legalization of cannabis. You can be sure that these interests are also going to factor into legal marijuana prices staying high for a good while yet. If you thought that the Government’s decision to legalize marijuana was based exclusively in goodwill, civil liberties and freedoms, and more simply ‘doing the right thing’, think again.

So, we can expect legal marijuana prices paid at licensed retailers to be considerably higher than weed prices paid to private suppliers for a few years still. Even after that it’s entirely possible that legal weed will still be pricier than illegal weed to the point that the ‘black market’ continues with the same vigour it always has.